This procedure explains how to upload a multitarget application (MTA) from a CI/CD pipeline to Cloud Transport Management and then import it into its target environment.

The following graphic provides an overview about the interplay between continuous integration and Cloud Transport Management: 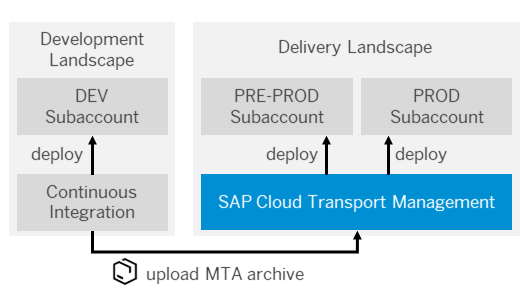 You can use this scenario to extend any CI process that meets the prerequisites, for example, the one described in Build and Deploy SAPUI5 or SAP Fiori Applications on SAP BTP with Jenkins.

The following graphic shows an example of the detailed procedure when combining continuous integration and Cloud Transport Management:

If you use the pipeline of the following code snippet, you only have to configure it in the .pipeline/config.yml.

Following the convention for pipeline definitions, use a Jenkinsfile, which resides in the root directory of your development sources.

This is a basic configuration example, which is also located in the sources of the project.

Configuration for the Upload to Cloud Transport Management¶

For a detailed description of the relevant parameters, see tmsUpload.